This engineering bulletin discusses work done by Wiss, Janney & Elstner Assoc. (WJE) who examined the effectiveness of calcium nitrite corrosion inhibitor and other corrosion protection systems for protecting steel in concrete. The WJE research was sponsored by the Federal Highway Administration (FHWA) as well as members of private industry. Several conclusions were made as a result of this study, including:

In the alkaline environment provided by concrete, steel forms a protective ferric oxide layer. As chloride ions reach the steel surface, they attack the steel at flaws in this “passivating layer”, and initiate corrosion. As rust forms, the steel is weakened, and this expansive reaction causes stress inside the concrete. Cracks form at the reinforcement, and eventually, the concrete will crack and spall extensively.

In order to protect the reinforcement, several measures must be taken. Slowing the rate of chloride ingress delays the onset of corrosion. Chloride ions at the reinforcement at a concentration of 0.594 - 0.890 kg/m3 (1.0 - 1.5 lbs/yd3) initiate corrosion. The time it takes for this amount of chloride to reach the steel depends on the concrete cover and the concrete permeability to chloride ions, which is affected by the water/cement ratio and concrete additives.

The FHWA hired WJE to run a series of tests to determine the effectiveness of corrosion protection systems. The results of these tests are reported in the FHWA report “Protective Systems for New Prestressed and Substructure Concrete”. In addition, members of private industry sponsored WJE as they continued these tests past the time required by the FHWA. The test procedures are briefly described on the following page.

Two different test procedures were run. The first included minidecks, pictured in Figure 1. Macrocell corrosion was measured by setting up a galvanic cell. Two pieces of rebar were cast near the top of the sample, and four pieces of rebar were cast near the bottom of the sample. A dike was built around the top surface of the sample and filled with saltwater. The chloride ions from the salt diffused through the concrete, reaching the upper mat of rebar. Since no chloride ions reached the lower mat during most of the test, these four rebars did not corrode. A galvanic cell was created by electrically connecting the upper and lower rebar mats, in order to increase the corrosion rate of the upper, or anodic, mat of steel.

Methods of monitoring corrosion were: 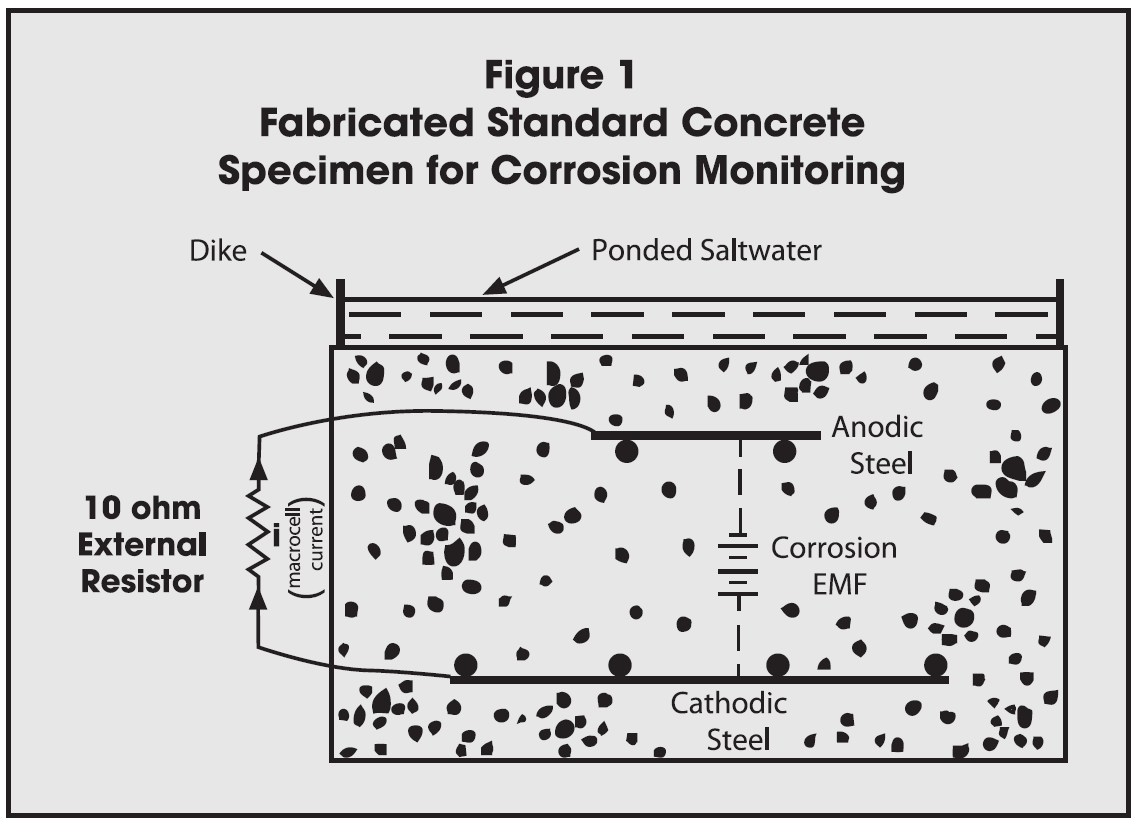 The most accurate method of measuring corrosion rates is monitoring the corrosion current. Although the macrocell corrosion current has limited accuracy, the parameters in this experiment are within those limitations. Chloride concentrations were also determined.

The second year-long study examined 19 full-size bridge members: cast-in-place columns and beams, and precast piles and deck panels. These specimens were subjected to various types of exposure to salt, designed to imitate the environments bridges are actually exposed to.

A water/cement ratio of 0.44 was used for all specimens. The cast-in-place concrete was moist-cured, while the precast members were heat-cured overnight. The same methods of monitoring corrosion were used as in the previous test.

The results of these two test programs confirmed many facts previously known or suspected. In each of the studies, an increase in the concrete cover over the steel extended the time it took for chloride ions to reach the reinforcement and, therefore, corrosion initiation.

As a result of these tests, the FHWA recommended increasing concrete cover to at least 55 mm (2 1/4 in.), in order to minimize the risk of early corrosion. These studies do not indicate that such concrete cover alone will provide adequate corrosion protection, but that it is an improvement over low, inadequate cover.

Lower water/cement ratios also decreased the rate of chloride ion diffusion through the concrete. As shown in Figure 2, the amount of chlorides at the rebar was lower, and the onset of corrosion was delayed in samples with lower water/cement ratios. As a result, the FHWA suggested than a ratio of no more than 0.44 be used. Many other studies have arrived at similar conclusions.

A microsilica (silica fume) admixture drastically reduced the ingress of chloride ions. The microsilica concrete specimen with 25 mm (1 in.) cover was corrosion-free. The study also notes a great increase in the concrete resistivity of the sample containing microsilica. A high resistivity may slow the rate of macrocell corrosion.

Along with samples tested for the FHWA, other conditions were examined by WJE for members of private industry. All of the water/cement ratios and concrete covers are listed in Table 1 for the plain concrete and concrete containing DCI® (calcium nitrite). Some of the minibeams were only tested for 48 weeks. The remainder were tested until they had been subjected to 116 weeks of cyclic ponding. 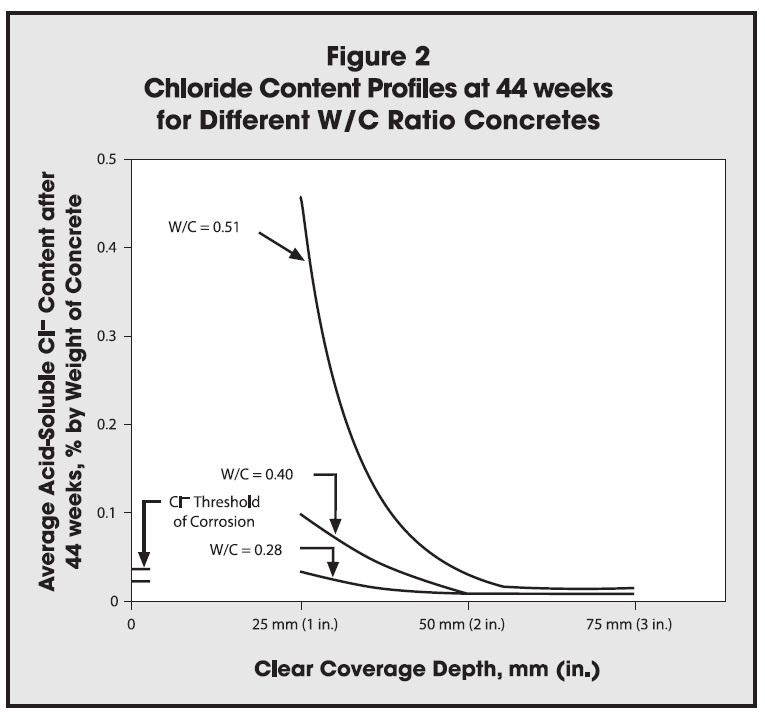 The time at which corrosion began, and the severity of the corrosion were both affected by the presence of DCI®.

Under 25 mm (1 in.) of concrete cover, steel rebar began corroding after 6 weeks in 0.50 water/ cement ratio concrete. After 48 weeks of cyclic ponding, the minibeam had an average macrocell corrosion current of 225 microamps.

In DCI® concrete samples with the same cover and water/ cement ratio, the onset of corrosion was delayed. With a DCI® dosage of 20 L/m3 (4 gal/yd3), samples showed signs of corrosion after 9.5 weeks (a 58% increase of the time to initiation). When DCI® was added at 30 L/m3 (6 gal/yd3), corrosion began after 11 weeks of cyclic ponding (an 83% increase). The average macrocell corrosion current was 34 microamps, less than one-seventh that of plain concrete samples.

After 116 weeks of ponding, the corrosion potentials were -540 mV and -335 mV for plain and DCI® concrete respectively. All of these results are listed in Table 2.

The effectiveness of DCI® was confirmed in samples with lower water/cement ratios and 25 mm (1 in.) of cover. Steel in plain concrete with water/ cement ratios of 0.40 and 0.32 showed signs of corrosion after 5 and 2.5 weeks respectively.

Based on the results of the first series of experiments, several corrosion protection systems were selected for further examination. Full-sized bridge members were made with both cast-in place and prestressed concrete. The water/cement ratio of the concrete was 0.44. Cover varied from 25 to 50 mm (1 to 2 in.) for gray steel; all other samples had 25 mm (1 in.) of cover.

As a result of these tests and others, the FHWA developed several design considerations for bridge members. These included:

In addition, WJE came to the following conclusions, based on minideck tests that continued to 116 weeks for plain concrete and concrete containing calcium nitrite:

Low water-to-cement ratio concrete, high concrete cover and heat-cured concrete extend the time before which corrosion of the steel rebar begins. However, in order for structures to achieve a long design life, additional corrosion protection is necessary. Calcium nitrite provides the protection needed to insure a long-lived, safe structure.

We hope the information here will be helpful. It is based on data and knowledge considered to be true and accurate and is offered for consideration, investigation and verification by the user, but we do not warrant the results to be obtained. Please read all statements, recommendations and suggestions in conjunction with our conditions of sale, which apply to all goods supplied by us. No statement, recommendation, or suggestion is intended for any use that would infringe any patent, copyright, or other third party right.

DCI® is a trademarks, which may be registered in the United States and/or other countries, of GCP Applied Technologies Inc. This trademark list has been compiled using available published information as of the publication date and may not accurately reflect current trademark ownership or status. These products may be covered by patents or patents pending.