Due to the high pH of concrete, steel in concrete is surrounded by a natural layer of iron oxide called the passivating layer, which protects the iron from rusting. In the absence of aggressive ions such as chloride ions, corrosion of reinforcement does not take place. As chloride ions
from saltwater or deicing chemical reach the steel, however, they undermine the oxide layer and the iron rusts.

In the protective ferric oxide layer that forms around the reinforcing steel or prestressed strand, there are microscopic ferrous oxide defects (Figure 1). Chlorides may reach the steel at such a defect, initiating corrosion. As corrosion continues, the oxide layer becomes undermined by chloride ions and rust products. 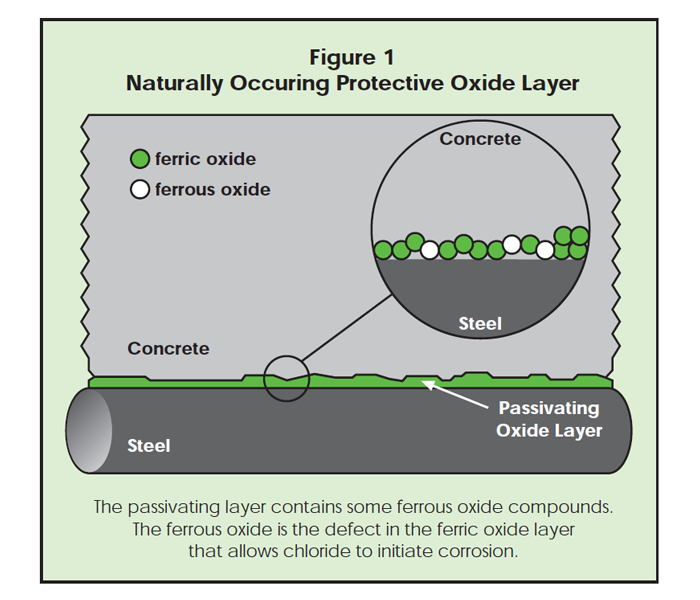 The formation of rust is an expansive reaction, creating large tensile forces inside the concrete. Staining, cracking and spalling occur in concrete containing corroding steel.

A corrosion inhibitor modifies the surface chemistry of the steel in order to slow or stop the corrosion process. In concrete, an inhibitor does not slow the ingress of chlorides, but protects the steel despite high concentrations of chloride ions. DCI® is a calcium nitrite solution added to the fresh concrete, to become an integral part of the concrete matrix. This simple method of application insures proper distribution and complete corrosion protection for all embedded steel and other metals. Unlike other inhibitors, calcium nitrite does not have any negative effects on the physical properties of concrete. DCI® corrosion inhibitor is classified as an ASTM C 494 Type C admixture.

Calcium nitrite protects steel in concrete by assisting the natural defense that is already present. In an alkaline environment, steel forms an oxide from iron (Fe), oxygen (O) and hydroxide ions (OH–). Initially, the oxide is formed with ferrous ions (Fe++). The ions are generated according to the equation: Fe Ý Fe++ + 2e– The alkaline environment causes the ferrous ions to become ferric ions (Fe+++), according to the reaction:

Even though ferrous oxide on iron in concrete will convert to ferric oxide, there is always some ferrous oxide present, which is not part of the protective passive film that keeps the iron from corroding. See Figure 1. Ferrous oxide is less resistant to chloride anions and is the site at which pitting corrosion initiates. At ferrous oxide sites, there is a defect in the passivating layer. This allows chlorides to attack the iron atoms. Note that the more chloride ions present, the higher the likelihood of a chloride anion finding a ferrous defect.

Once pitting begins, new iron atoms are exposed, which are susceptible to further chloride attack, since these newly exposed iron atoms must go through the ferrous state to reach the stable ferric state. Thus, the corrosion pits continue to grow and corrosion products build up. This process is shown in Figure 2. 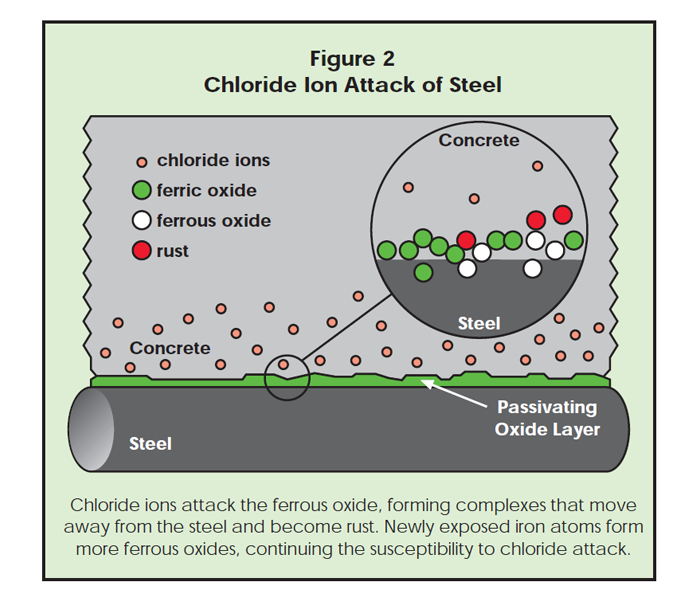 Nitrite ions assist the natural ferric oxide layer in keeping the chloride ions from complexing with ferrous ions. The nitrite does this in three ways. First, it will oxidize ferrous oxide, in order for it to become the protective ferric oxide, which is not attacked by chloride. Since the number of ferrous sites are small compared to ferric sites in the alkaline environment, essentially no nitrite is consumed (Figure 3A). 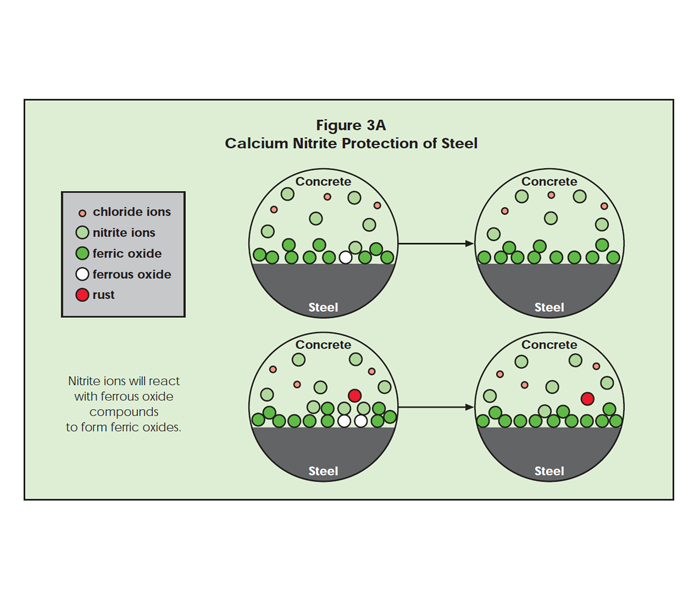 Second, the nitrite anions chemisorb at the iron surface and create a fortified ferric oxide protective layer. As in Figure 3B, the nitrite ions enhance the natural protection provided for steel by concrete. As shown in Figure 3C, ferrous oxide defects are surrounded by nitrite ions, and less likely to be exposed to chloride ion attack. 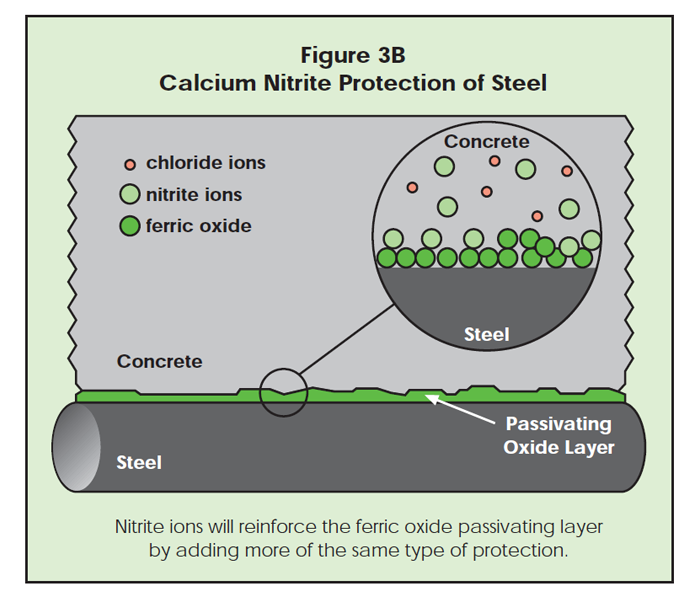 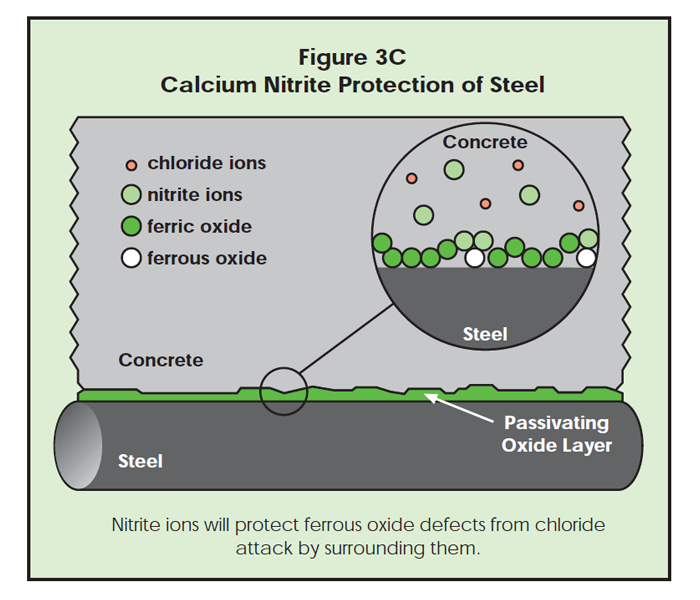 If chloride ions should find a defect, corrosion begins. As the ferrous chloride complex (rust) moves away from the steel surface, new ferrous ions may be exposed to the surrounding concrete. Nitrite ions can quickly surround the new ferrous ions, protecting them from chloride attack. While shielding the ferrous ions from chloride attack, the nitrite ions may oxidize ferrous ions to the ferric state. The passivating oxide layer is repaired this way and corrosion pitting stops (Figure 3D). If nitrite ions are in the concrete, they can oxidize the ferrous to the protective ferric state. In the absence of nitrite, chloride ions attack the newly exposed ferrous oxide, forming more rust. 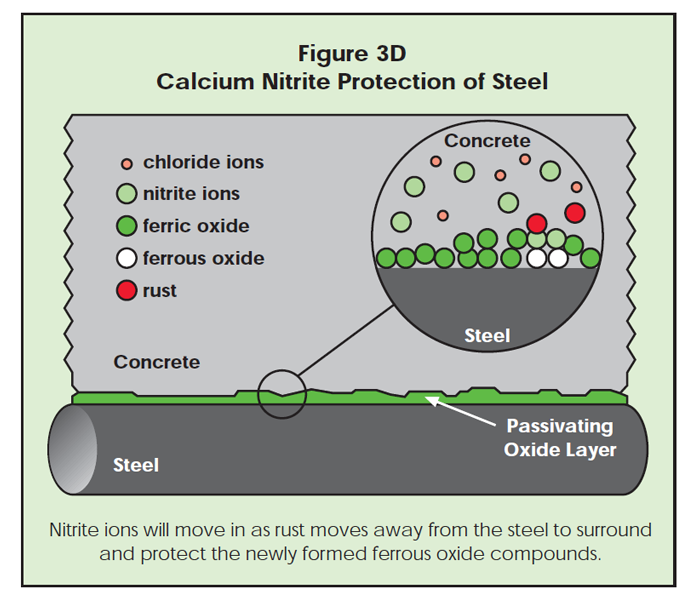 Calcium nitrite also is effective in cracked concrete, unlike some physical barriers to chloride ingress that are used to protect steel from chloride induced corrosion. Such barriers are vulnerable to many types of stress, exposing the unprotected steel to chlorides. Even if concrete has cracked all the way to the steel, DCI® continues to provide protection (see DCI® Technical Bulletin 0907). Corrosion protection methods that work by slowing chloride ingress vary in their effectiveness in cracked concrete.

Calcium nitrite remains an integral part of the concrete throughout the life of the structure. The nitrite ions do not diffuse out of the concrete, and they do not react with other elements in the concrete with the exception of repairing of the passivating layer. This repair process is so effective it causes essentially no decrease in calcium nitrite content. This has been confirmed by conducting analyses on concrete samples from field structures and laboratory specimens. DCI® will protect the steel from chloride-induced corrosion up to a certain chloride concentration (see DCI® Technical Bulletin 0906). This significantly extends the service life of a structure.

Eventually, the amount of chloride at the steel reaches a level high enough to initiate corrosion. The number of chloride ions becomes high enough that some reach newly formed defects. Even as corrosion begins (at a chloride concentration much higher than in concrete without calcium nitrite), corrosion rates will be lower than the rates on unprotected steel when corrosion began. The reservoir of DCI® surrounding the steel continues to inhibit corrosion, even though it has now been overpowered by the chloride ions.

We hope the information here will be helpful. It is based on data and knowledge considered to be true and accurate and is offered for consideration, investigation and verification by the user, but we do not warrant the results to be obtained. Please read all statements, recommendations and suggestions in conjunction with our conditions of sale, which apply to all goods supplied by us. No statement, recommendation, or suggestion is intended for any use that would infringe any patent, copyright, or other third party right.

DCI® is a trademark, which may be registered in the United States and/or other countries, of GCP Applied Technologies Inc. This trademark list has been compiled using available published information as of the publication date and may not accurately reflect current trademark ownership or status.