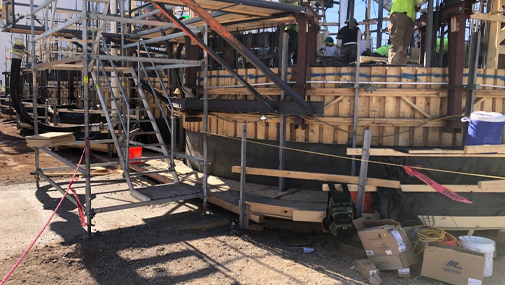 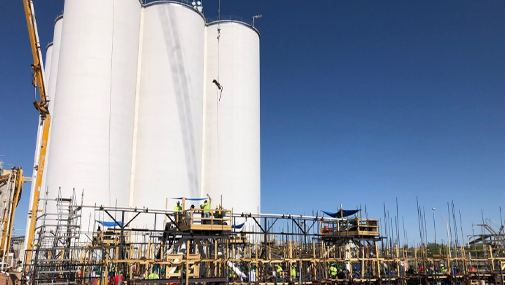 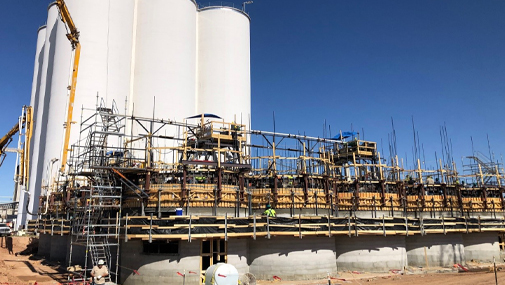 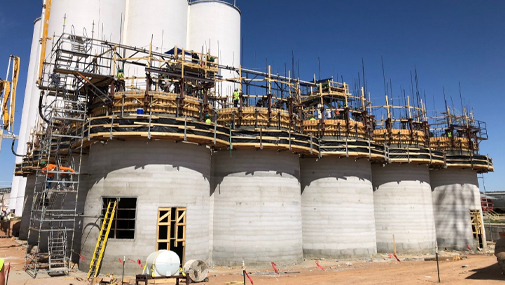 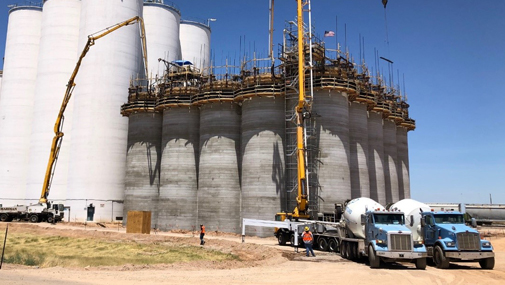 For the ready-mix concrete, McCormick awarded the project to CalPortland Company, the largest cement and construction material producer on the west coast. “We worked with CalPortland on a project in Washington years ago, and their staff and attention to detail were top notch,” said McCormick Construction Chief Operating Officer Steve Swanson. “They are all about making sure customers get what they want.”

The sheer size of the slip footprint and the small (21’) diameter of the silos made it critical to select the right mix design. “We needed concrete that would flow easily through the congested rebar and would perform well in extreme temperatures,” said Swanson.

“The biggest challenge of the project was pouring concrete in ambient conditions exceeding 100° F, which required pre-trials on set times throughout the day,” explained CalPortland Company Director of Quality Control in Arizona Lauro Rivas, P.E. “We needed large quantities of chilled water and ice for temperature control measures. Having pre-conditioned/tested aggregates was also key for cooling the coarse aggregate and maintaining SSD moisture.”

For this intensive project, the concrete had to set fast enough to support the concrete above it, and also needed to remain pumpable. “We pour concrete at sites across the U.S., and each one requires its own ‘brew,’” said Swanson. “For this project, we performed numerous test pours with CalPortland and were pleased to get the mix the right way we wanted it.”

The process required a fair bit of mix optimization, as well as stringent quality control to maintain the mix. CalPortland performed laboratory and field trials to test for optimum set time, slump retention, and temperature control. Throughout concrete production, a CalPortland QC technician worked at the plant and at the jobsite at all times, checking and adjusting concrete loads to maintain consistency.

"We needed concrete that would flow easily through the congested rebar and would perform well in extreme temperatures,"
-

"The biggest challenge of the project was pouring concrete in ambient conditions exceeding 100° F, which required pre-trials on set times throughout the day,"
-

“It was a successful pour and our customer was pleased with the consistency and the mix performance,” Rivas said. “With GCP admixtures, I felt like we had control of the set time in the mix,” Swanson said. “The results were stellar.”

"GCP admixtures all worked together with the appropriate dosages to improve slump retention and set time extension, which were optimal for hot weather conditions,"
-