How to reduce bug holes in concrete 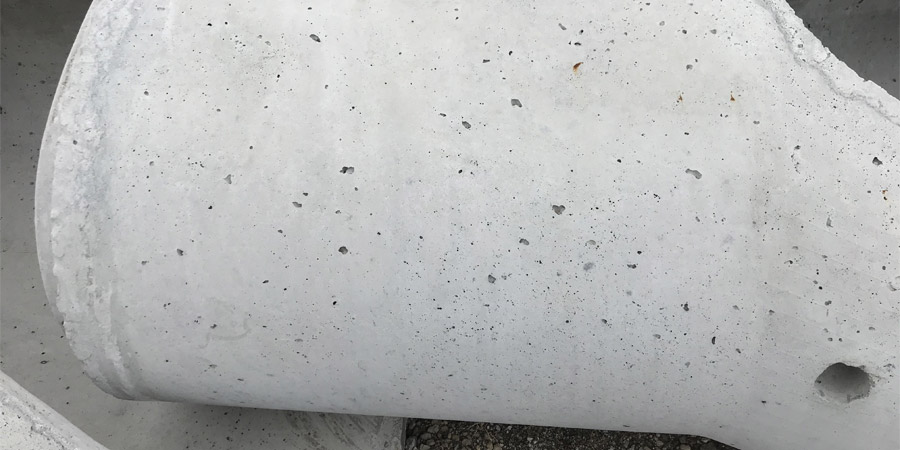 When working on a concrete structure where aesthetics are important, extra care needs to be taken to prevent bug holes. These unsightly surface voids occur when air is trapped between the form and the fresh concrete.

Providing customers with the desired quality of finish is very important and the manner in which we satisfy this expectation can have significant cost impacts to the company. Final finishing processes to repair surface imperfections can increase production costs, bottleneck the production cycle, diminish aesthetic features, and reduce owner confidence in the product quality. Minimizing the potential for bug holes is an efficient way that we can achieve high quality surface finishes at relatively low cost. It's much more cost-effective to develop placing procedures to prevent these surface defects than to go back and repair them later.

There are many variables that can impact bug holes or cause unsightly voids in the concrete surface.

Surface condition. The geometry, type of material, and condition of forms all play a role in reducing bug holes. The number of visible bug holes can be reduced by using smooth forms, free of dents, holes, or build-up, along with the proper form release agent. The right form shape also gives air voids at formed surfaces the opportunity to move upward more freely as it is displaced by the concrete. In addition, check that the forms are tight. Otherwise, concrete can seep out of the edges, causing voids or honeycombing to form.

Moisture. Wipe the forms before reapplying the form release agent. If the form has been outdoors, pockets of moisture may form and provide opportunities for bug holes.

Quantity of release agent. Wipe away excess form release agent from each form, as additional release agent on the form surface can bubble up and give air an opportunity to consolidate.

Pour rate. While most contractors want to get the pour done as quickly as possible, if it is too fast, the air doesn’t have a chance to escape. Filling forms at a smooth, slightly slower rate allows for the right balance, so that forms can be filled, while giving air the chance to get out.

Consolidation. Proper use of vibration is important, and vibrating at proper intervals is crucial. It’s important to have sufficient overlapping of the vibrator’s area of influence to prevent areas void of vibration. Using a vibration machine on the outside of the form is an extra step that can provide room for adjustments of amplitude and frequency to ensure a quality outcome. Avoid over vibrating though, to prevent segregation of the concrete. It may be important to experiment with different frequencies and amplitude of vibration to get the desired results.

Aggregate. Ensure the stability of aggregate in the concrete mixture, which can help support concrete uniformity while the forms are being filled.

Air stability. The materials, mix design, and selection of admixture all influence the amount of entrained air in the concrete. Mix designs that have a better hardened air void system will tend to provide a better surface finish. Mixing thoroughly helps reduce large air bubbles. Also, pay careful attention to the slump retention to verify that the mix is maintaining its workability long enough to complete placement and finishing.

Brooming or light blasting may be needed to expose bug holes that are not immediately obvious upon removal of forms, since these can sometimes be concealed by a thin film of mortar. This most commonly occurs in deeper sections where concrete cascades down the form surface while filling earlier lifts.

Preplanning to address the above considerations will help improve the aesthetics of the concrete. If it is a critical architectural placement, having a test pour is advisable.