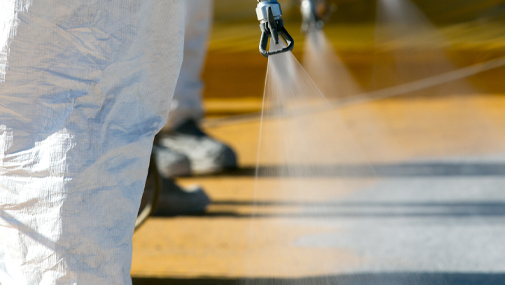 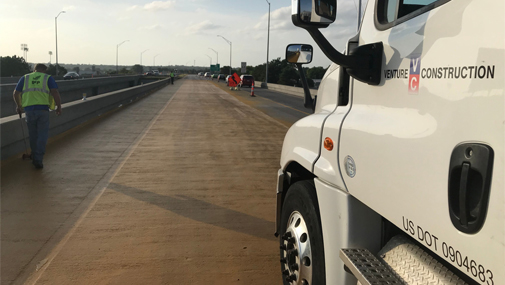 The Midwestern United States faces tough winters, during which its roadways are subjected to considerable use of de-icers to make the roads drivable. However, the de-icing products are later dissolved into a solution that leaves the area’s bridges vulnerable to corrosion. Water and de-icing salts infiltrate unprotected concrete bridge decks and initiate corrosion in steel reinforcement. To extend the service life of bridge decks, owners of bridge stock are increasingly turning to waterproofing to prevent premature deterioration.

Previously, polyurea-based waterproofing systems were used to protect these concrete bridges, but in this case, the highway agency needed quicker return to service for a heavily trafficked highway bridge and turned to Venture Construction for an answer.

"We recommend the ELIMINATOR® waterproofing system because it is unequaled in terms of performance and reliability."
-

A national leader in bridge deck waterproofing, Venture Construction Inc. has long relied on the ELIMINATOR® bridge deck waterproofing system for projects of this type, in part because the system is significantly less moisture sensitive than competing products and has no critical overcoating time between system components. This versatility saves time for the waterproofing applicator and keeps their customers happy by minimizing lane closures during bridge refurbishment.

“We recommend the ELIMINATOR® waterproofing system because it is unequaled in terms of performance and reliability,” said Eric Toman, Regional Manager for Venture Construction.

GCP’s field technician worked hand in hand with the Venture team throughout the project. Unlike many alternative waterproofing systems that aren’t able to be quality tested until the membrane has cured, the ELIMINATOR® system features on-the-spot quality assurance. These QA tests begin while the waterproofing is being applied, to swiftly verify the thickness of the waterproofing membrane.

After the two coats of waterproofing were applied, the Venture team broadcast aggregate into the top layer of the membrane as it cured. This acted as a shear key for paving, but also enabled cars to drive on the waterproofing membrane even before paving was installed, as necessary. Immediately prior to paving, a tack coat was applied to promote adhesion of paving to the waterproofing layer. When the paving was installed, the asphalt cooled to create both a chemical and a mechanical bond with the waterproofing membrane. This increases overall adhesion and promotes composite action between the deck and paving that, in turn, provides significantly improved overall long-term performance of the deck.

“The ELIMINATOR® system is the premier waterproofing treatment,” said Toman. There are other options, but none of them offer what the ELIMINATOR ® system does.”

"The ELIMINATOR® system is the premier waterproofing treatment"
-