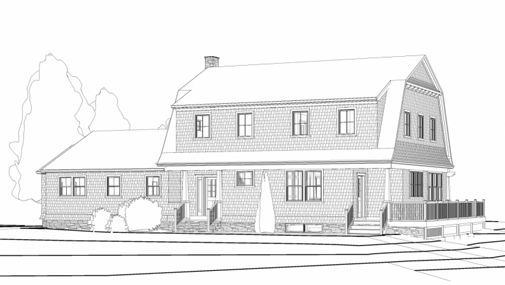 For more than 25 years, Sweenor Builders Incorporated has custom crafted luxury homes in coastal Rhode Island. The award-winning builder collaborates with many of New England’s leading architects on exceptional home construction and remodeling projects. Since 2017, Sweenor Builders has partnered with the Emmy Award-winning TV series This Old House to build and remodel one-of-a-kind homes.

For its fourth project with This Old House, Sweenor Builders converted a 1940s ranch-style home in Westerly, Rhode Island into a four-bedroom Dutch Colonial with an open floor plan. Formerly a ship-building community, Westerly has many homes like this ranch house that have a plethora of original knotty pine interiors. The new homeowners were keen to give the home a fresh look and layout for their family.

Sweenor Builders brought building and design expertise to this inventive project, which encompassed adding a second floor, expanding the kitchen and dining room space, raising the ceiling height and adding a deck. To provide a seamless transition, Sweenor’s architectural designer recommended creating a gambrel-style roof on the front and leaving the existing roofline on one side of the house. This gave the appearance that an elegant wing had been added to the main house.

The firm is known for ensuring the high level of energy efficiency that today’s homeowners expect.

As with all its construction jobs, Sweenor took great care in waterproofing and sealing the home prior to putting on any finishes. “Most of our work is done near the coast, and we get a lot of wind-driven rain here,” said Sweenor Builders Founder and CEO Jeff Sweenor. “We like water to be well managed.”

"We like GCP’s self-adhered roofing underlayment and weather barrier products because they seal when you penetrate them."
-

“Our philosophy is to make sure the home is dry and leak proof before any shingle goes on,” Sweenor said. “We’re all about waterproofing and air sealing. We typically use GRACE ICE & WATER SHIELD® underlayments on the entire roof because it gives us a faster way to get dried in before shingles go on. We like GCP’s self-adhered roofing underlayment and weather barrier products because they seal when you penetrate them.”

VYCOR® enV-S™ weather barriers from GCP Applied Technologies were also critical to the renovation project. “The original sheathing materials were 2x6s or 2x8s, since people weren’t as conscious about air sealing back when the original home was built,” said Sweenor. “VYCOR® enV-S™ weather barriers are a self-adhered membrane that works really well to bridge an imperfect sheathing job so we can provide air sealing for the home. That makes a big difference when it comes to heating and cooling costs.”

The builder used GCP Applied Technologies products based on their long history of performance and their compatibility. “All the GCP tapes and specialty products complement each other and are engineered to adhere to one another,” said Sweenor. “Having a system instead of individual components is beneficial to ensure strong adhesion, and ultimately strong weather protection.”

"VYCOR® enV-S™ weather barriers are a self-adhered membrane that works really well to bridge an imperfect sheathing job so we can provide air sealing for the home. That makes a big difference when it comes to heating and cooling costs."
-