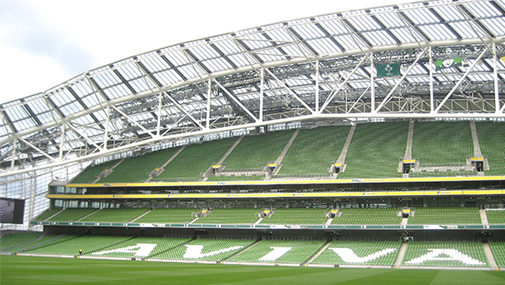 Dublin’s new international stadium for rugby and football, the Aviva Stadium, officially opened in May 2010. Conceived by the Irish Rugby Football Union, the Football Association of Ireland, and the Irish Government, the stadium construction began on the site of the old Lansdowne Road venue, which was demolished in 2007. It has four tiers and a capacity for 51,700 seated spectators.

The stadium’s distinctive roof design, makes it one of the most unique sports stadiums in Ireland. It is shaped in a wave-like manner, which integrates well with the residential area of Dublin.

The TC3 System allowed for the production of a black concrete, similar in appearance to tarmacadam, without posing a threat to the integrity of the HYDRODUCTⓇ Drainage System.

During stadium construction, a black concrete with an exposed aggregate finish was required for an external podium deck at the corporate entrance. The original specification stated that the podium deck would be covered with black tarmacadam. However, since the HYDRODUCTⓇ Drainage System was also being employed to remove water from the deck, there was a fear that the hot tarmac would melt the plastic pipes of the HYDRODUCTⓇ drainages when it was laid on top of them and would greatly reduce their effectiveness. The architects wanted to cover the deck with a material that would have the same aesthetic appearance as tarmacadam but would not have an adverse effect on the performance of the HYDRODUCTⓇ Drainage System.

"The architects wanted to cover the deck with a material that would have the same aesthetic appearance as tarmacadam but would not have an adverse effect on the performance of the Hydroduct® Drainage System.  "

The solution was to use the TC3 Exposed Aggregate System during stadium construction. It allowed for the production of a black concrete with an exposed aggregate finish, which gave a similar appearance and texture to tarmacadam, without posing a threat to the integrity of the drainage system.

Several laboratory and full-scale trials were carried out on the top surface of the concrete revealed exposed coarse aggregate, ensuring it was suitable. This work was made possible thanks to GCP’s Blue360sm Total Business Advantage, who provided the products and services needed to optimize the project.