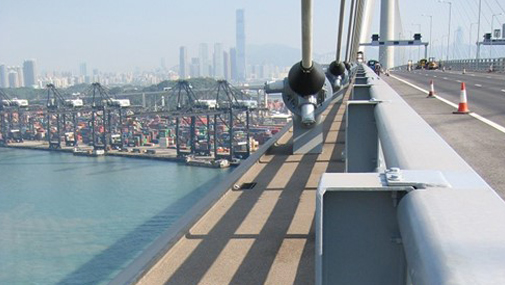 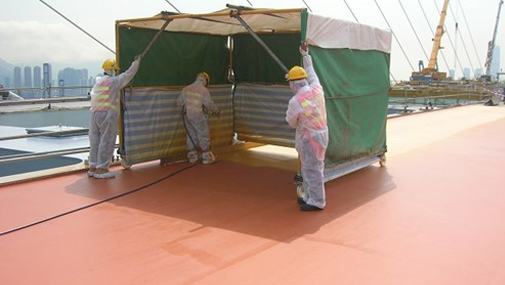 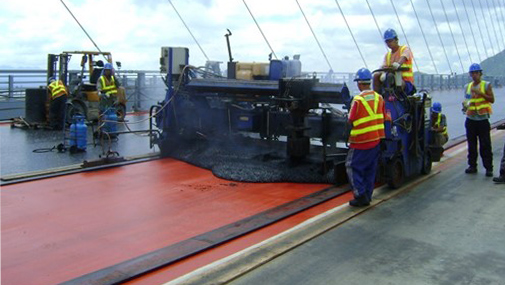 Stonecutters Bridge in Hong Kong, the second longest spanning cable-stayed bridge in the world, epitomizes the latest in bridge engineering. The dual three-lane crossing utilizes 33,500 tonnes of structural steel in the bridge deck, 32,000m3 of concrete in the towers, and the 65 steel deck units rely on 224 cables.

The waterproofing system chosen was required to effectively protect the new mega structure from the weather extremes experienced in Hong Kong, from monsoon rains to extreme heat, as well as the high levels of traffic travelling to and from Chek Lap Kok airport and the region’s container port. This elegant asset will fulfill its important strategic function for many years to come.

Extensive pre-construction testing confirmed that the ELIMINATOR® system could achieve the specified tensile and shear adhesion strengths to the mastic asphalt used in the surfacing material. Based on unique ESSELAC® advanced resin technology, the ELIMINATOR® system’s conformance to the bridge deck waterproofing standard BD47 meant it met the strict criteria for the Stonecutters project.

The deck was primed with anti-corrosive ZED S94 primer, and the ELIMINATOR® system was sprayed on 47,500m2 of surface area. Electrical holiday testing was done to confirm the integrity and water tightness of the system. Tack Coat No.2 was then roller applied onto the ELIMINATOR® membrane. Adhesion tests were completed to confirm the high adhesion values between the waterproofing and surfacing achieved in the pre-construction testing were also met on-site.

The BRIDGEMASTER®system was spread on 5,000m2 of the outer edges of the deck up to the stainless steel parapet that separates the main carriageway. In addition, METASET® resifilla repair mortar was used to build up the 1,000m2 of the inner edge of the bridge’s two decks. Its viscosity enabled a triangular shape to be created, so that water travels away from the deck.

The ELIMINATOR® system met the strict design criteria led for important, high profile structure. The quick curing nature of the products and their rapid application ensured that this element of the project was completed ahead of the scheduled programme and within budget.